A museum “truth” is that every artifact has a story.  In the case of our Hall of Fame, every member has a story.  We have selected 35 individuals to date.  They are listed below in “birth” order.  Each name is linked to a short biograpy.

Nominations are generally accepted from early January to Mid March each year.  Contact us at Homeville@CNYLivingHistory.org if you want more information.

(Items in italics have associated memorabilia in the museum) 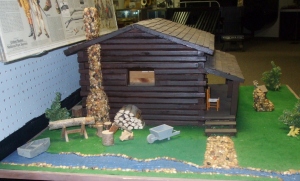 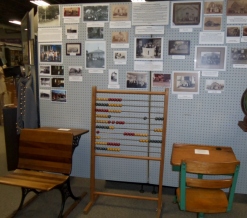 10th NY Calvary Regiment—Sgt Llewellyn P. Norton, from Scott, NY, was awarded the Congressional Medal of Honor for actions during the Battle of Sayler’s Creek, Virginia on April 6, 1865.

Brockway Carriage Works founded in 1875 – The entire south half of the main building is filled with Brockway trucks (donated and on-loan) and components.  Extensive displays on the Brockway family and company are available upstairs.

Cortland Traction Company was founded in 1882 and remained a key mode of local transportation until 1931.

Our display features a seat from a Cortland Traction Company trolley car. One of their routes ran from Cortland to Little York Park and back, but the trolley did not turn around. The handle on the corner of the seatback allowed the back to be flipped, so no matter which way the trolley was going, the passenger was always facing forward.

Increased mechanization in the fields improved productivity – visit the “TOYS” barn for a huge array of farming related implements spanning the past 200 years. 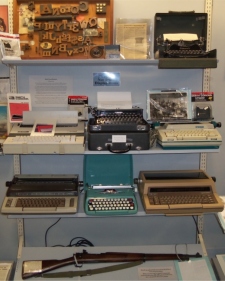 The company expanded, purchasing Corona Typewriter, Marchant Calculator, and other companies that allowed it to add items such as adding machines and copiers, making it one of the top business machine companies. In 1960, SCM Corporation consolidated production from several facilities (including Groton) at a new, state-of- the- art plant in Cortlandville. At its peak in 1974, the company had 5,300 employees; 4,000 were located in Cortland. The rifle at the bottom of this display was made by Smith Corona during World War II.

And just for fun…Sig Sautelle’s Circus was headquartered in Homer beginning in 1892.  George Satterly served as a drummer boy for the Union Army during the Civil War, then joined the North American Circus when he was 21 years old and became successful as a sideshow performer. He changed his name to Signor Sautelle, but his friends called him Sig. In the late 1800’s, he started his own circus.

He constructed the octagon-shaped building pictured at left (in a painting by Hugh Maxwell), located on Route 11 in Homer, in the early 1900’s. The first two floors were used as living quarters for his family and the third floor was a training area for acrobats. Before barns were completed behind the house, animals were kept in the cellar where there was a training ring. The painting pictured below was done by Marie Ripley and donated by Ed and Mary Tracy who owned the building when it was known as Tracy’s Restaurant & Bakery.

If you haven’t checked out the Hall of Fame biographies, read Chester Wickwire, Elmer Ambrose Sperry and Major General Levi Chase for insight into the late 19th century through mid 20th century.

Homer’s baseball team was first known as the Homer Town Team, then the Red Wings and the Red Sox.  But on May 9, 1939, the Homer Braves were formed as a semi-pro team in the southern Tier League.

Homer Municipal Stadium, whose grandstands were funded by George Brockway (founder of Brockway Trucks), was considered one of the finer small town fields in the Northeast.  After gaining lights in 1946 (notable for a small town ballpark), 1,915 fans attended the second lit game, played against the New York Black Yankees.  While the Homer Braves are long gone, the location of their stadium, now Griggs Field on Hudson Street, continues to host baseball and softball games for various community leagues.

It is believed that 400 major league baseball players played games held in Homer, either as members of the Braves or while on visiting teams.  The Braves manager, Dewey Griggs, made a name for himself during his success with the braves and was later hired as a major league scout.  He scouted such famous players as Hank Aaron, Roger Maris and Juan Marichal.  Copies of some of Griggs scouting reports are on display in Homeville.